Quantitative easing means an exceptionally expansionary monetary policy in which central banks create money and buy government bonds or illiquid financial assets held by banks. In this manner, a huge amount of liquidity is injected into the economy which theoretically should feed into new loans, boost growth and stimulate demand. 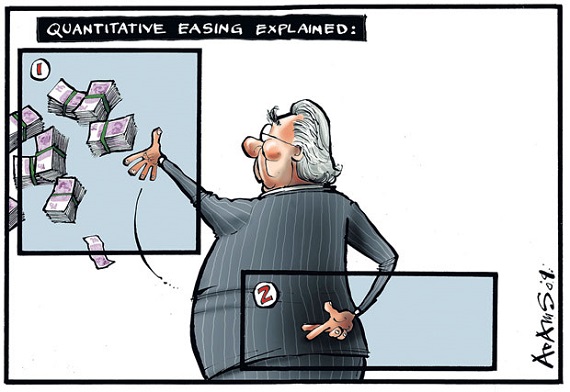 This strategy was invented in Japan but was used mainly by the Federal Reserve, the U.S. central bank. After a long period of reluctance, a policy with a very similar approach was adopted recently by the Central Bank of Japan to help the growth of a stagnant economy, high public debt and stop the deflation. They injected $ 1.4 trillion on the markets. A choice of failure for the country of the rising sun but regarded by many as the only way forward at this point of the economic crisis.

There are many economists who believe that after they intervened in the cost of money, the ECB should start with quantitative easing which has proven to work overseas. Buy government bonds and private is the only way to increase the money in circulation when there is virtually no room for maneuver on interest rates. The quantitative easing is instead perceived negatively by many emerging countries which will read the open attempt by industrialized countries to devalue their currencies and will want to go back to being competitive in the market.

TweetJust like keeping in good shape, achieving financial fitness also requires consistency and a whole lot of discipline. However, straightening out your finances is…