Money argument is one of the most common and debilitating moments in a person’s married or engaged life. It can ruin any relationship, no matter how promising and loving it may be. It is critical, therefore, for couples to understand the importance of having money conversations with each other.

One’s credit score is a good indicator of how well that person manages finances, as well as that person’s ability to get loan for emergency purposes. A poor credit rating means that person is likely having so many debts and unable to repay them. Before tying the knot, partners need to know how much debt each is bringing into the marriage. It is likely that one partner has more debt than the other does, but after marriage, both will share the burdens of paying off that debt. There has to be transparency and honesty between couples.

Budgeting based on Incomes

Living within means helps couples to keep loans at zero to minimum, but living below means helps them to save money for the future. Couples need to understand that during cohabitation, their incomes combined or not should be the utilized properly to meet the family’s needs. This could mean sacrificing some luxuries and comforts while single, especially when couples begin to have kids or buy a bigger home. 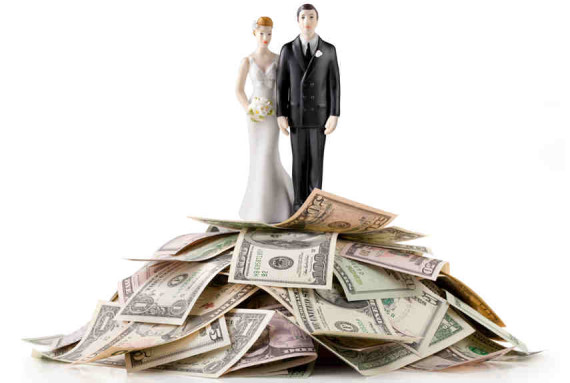 Couples have the option to combine their finances partially or fully. Based on what they agree upon, both should take responsibility for various areas in their married life. One may handle the day-to-day management of finances, as the other may not be very good at it. If the partners do not want to combine their finances, they still need to divide financial responsibilities, owning a portion of the payables, if both are earning. If only one is earning, then it is obvious who gets to pay everything.

Arguments over money are the top reasons why couples fight and divorce, according to Sonya Britt, assistant professor of family studies and human services at Kansas State University, Lou Carlozo reported for Money Under 30. If couples want their marriage to last and not fight over finances, it is imperative to start having money talks before and after the wedding.