Much impression on the Internet made the video of the free distribution of fruit and vegetables in Greece resulting in the crush of people. But if that weren’t enough, Athens is implementing a further reduction of 13.000 civil servants (they call it “the law Troika”), laid off and with the prospect of being entirely without salary already reduced by the end of the year. Unfortunately, however, this is not only a greek phenomenon. 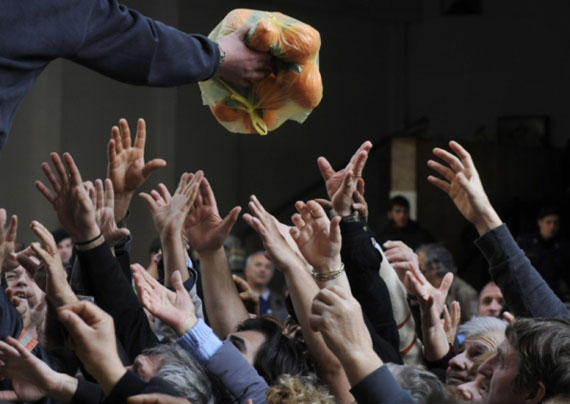 Here is a little news around the world where it is clear that cuts and layoffs occur almost anywhere. In Spain, for example, banks saved with the bailout this year will get 20.000 employees fired. In the Netherlands the Lego fires 380 workers. In Japan Fujitsu has announced the cutting of 5.000 people; Vodafone will fire 10% of the staff in the Czech Republic. South Africa announces that it has lost as much as 68.000 jobs just in the last quarter of 2012. In Australia the staff in pediatric hospitals is being reduced because the government has ordered budget cuts.

In Britain Rolls Royce deleted 320 seats, and 940 the Lloyds Bank. Barclays Bank will cut more than 2000 and the army of over 5000 soldiers. A research also reveals that the english finance will even cut 43.000 jobs within the next six months.

Even in Germany the HP dismisses 850 employees while Commerzbank announces the dismissal of even 6000 people and Daimler will cut 2100 between Germany and the USA. Even our local Unicredit will “take out” 1000 German employees. Deutsche Telekom will dismiss the 1200 and 900 of Air Berlin. Even the Coca Cola has 450 redundancies.

Finally, in the States, 1200 people walking in Illinois, more than 500 Harman and Food Lion and 700 from the Frontier Airlines. A 20% cut of human resources plans Dreamworks Animation by Steven Spielberg, 600 the Boston Scientific seat, 500 people by Time Inc., 600 by the United Continental and another 600 by the United Airlines. Blockbusters will also eliminate 3000 jobs.

TweetSpending some time for better management of your finances will surely pay off. This notion will be able to help you stay above your…